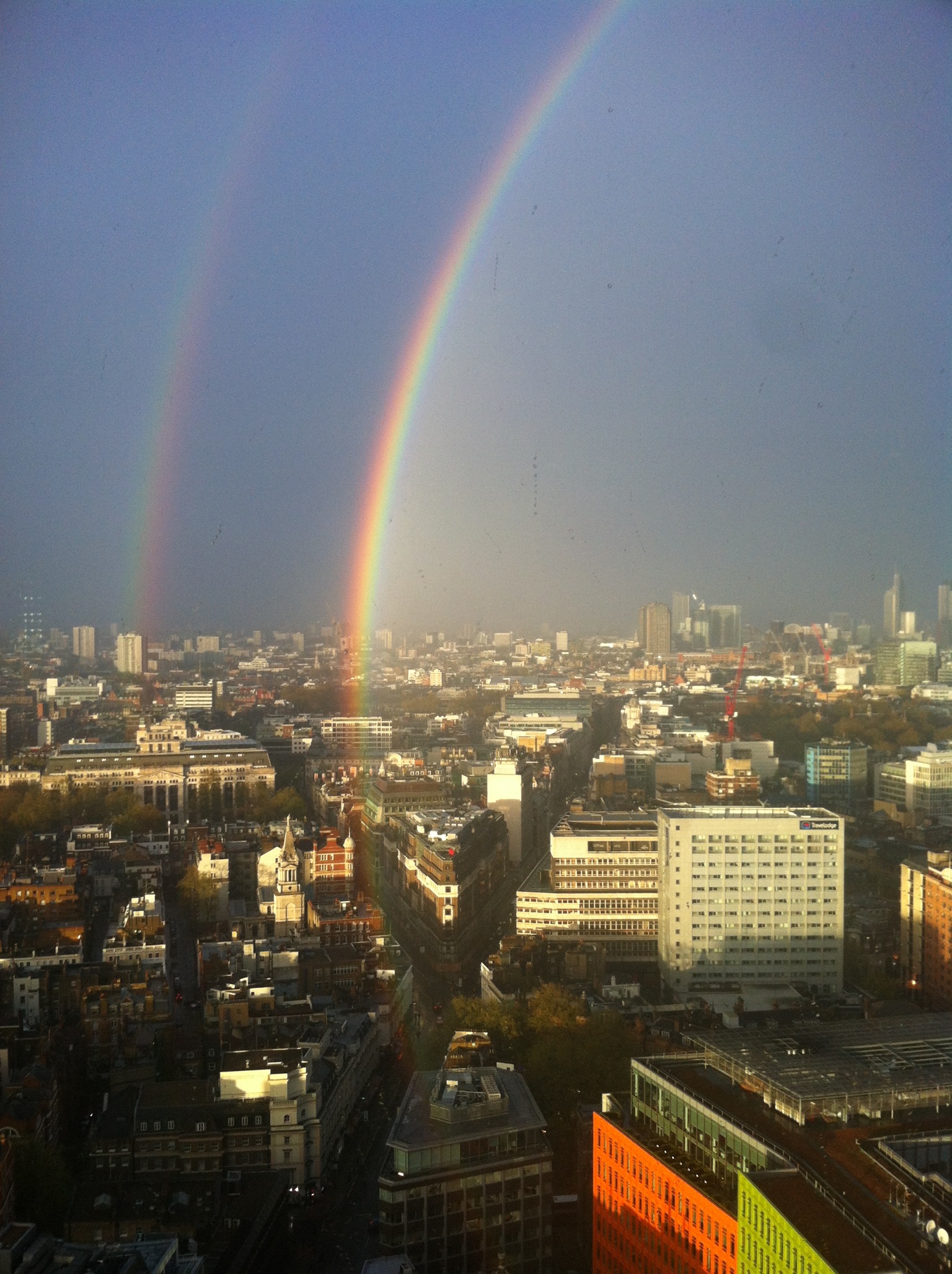 Somewhere Over the Rainbow?

Rainbows, they mean different things to different people, and for thousands of years have been celebrated as a sign of hope overcoming adversity – light breaking through the clouds after a storm.

Whether the Abrahamic references to Noah’s covenant with God, or the many other non-Christian religions and mythologies — Bifrost bridge to the Gods anyone? Repeatedly stories emerge of rainbows representing peace and hope in the face of adversity, respite after conflict.

The LGBTQ+ community too has embraced the rainbow as our symbol, ever since it was incorporated into a flag by the pioneering openly gay activist, Gilbert Baker in the 1970s.

However, at the time there was a scarcity of the hot pink fabric which led to a seven-striped version (without the hot pink) and then latterly in 1979, the Turquoise was removed to create an even number, as the flag was going to be used to flank the Pride march route – resulting in the iconic, ubiquitous six-stripe flag based on Baker’s design;

Since 1979, this six-striped version of the Pride flag has been a popular and iconic symbol for LGBTQ+ and its distinctive colours have been adapted into clothing, signs, sidewalks, steps, tattoos and badges either as a signifier of an LGBTQ+ person or an ally. This included a revolutionary scheme in UK to roll out rainbow NHS badges to foster inclusivity into healthcare (which historically has on occasion had a problematic relationship with health providers and anti-LGBTQ+ stigma, for more on that and the scheme please read this great blog).

Following the COVID19 pandemic in the UK, children and families have begun painting rainbows on pieces of paper and displaying them in their windows as symbols as hope – which is a touching and completely understandable movement. This seems to have gathered new meaning and morphed into a message of support for key workers and NHS staff. Just to be clear, I do not — nor do I know a single LGBTQ+ person who is uncomfortable about that gesture.

However, as a consequence of this many organisations have seen fit to either sell rainbow Pride flags as “thank you NHS flags” or just treat the design as clipart for their own marketing and messaging. A few weeks ago on a run, I was so shocked to see this banner that I stopped and took a photo of it and posted my frustration, unease and confusion to social media;

And more recently Plymouth City Bus bragged about “rebranding” their Pride bus to show support for NHS workers. While I’m not claiming that this was the intention of the team behind it, they have effectively reduced a bus which was designed to celebrate and show support for LGBTQ+ people to just a multi-coloured commodity —

Myself and several others have criticised this not only the move itself and its messaging but also the clumsy and insecure apology ‘we are sorry if it caused offence’.

For me, for more than half of my lifetime as an openly gay man, seeing the rainbow Pride flag or its colours has made me feel; welcome, safe and amongst my tribe (LGBTQ+ people and allies). From when I was bullied at school Even as recently as February, seeing the rainbow Pride flag in Brussels made me realise I’d stumbled by happy accident into the vicinity of the LGBTQ+ neighbourhood by following the restaurant recommendation of a friend.

The rainbow Pride flag is ubiquitous, and a symbol which is recognised across the globe, including in countries where it is displayed with enormous risk owing to human rights atrocities against LGBTQ+ people. To be frank, I find it insulting to see it treated as stock template that organisations and companies can appropriate without any consideration for the marginalised community for created it for themselves.

In recent years there have been calls for the flag to be updated (particularly in the West), to better represent marginalised groups within the LGBTQ+

I respect that there are extremely good arguments for the updates in the revised design above and the individual denominations or variants of the flag which different groups within the LGBTQ+ community have created for themselves over time, just some of which are included below;

However, I personally feel that it is not the original flag that has failed, but rather the more privileged members of the LGBTQ+ community (cis white gay men like myself predominantly) who have failed to uphold it. We need to do more in order to protect, support and represent our marginalised POC, Trans, Bi and Intersex family. If the new flag was adopted globally in a heartbeat without the necessary changes it would simply be as callous a rebranding exercise as th­e bus one outlined above.

Please do not dismiss myself or any of my friends who are concerned at how readily our symbol has been co-opted into a new context.

We are entitled to feel frightened and unhappy at the ease and speed at which this has happened. While I hope that the updated flags become increasingly prominent over time, I think it is insulting to the heritage of the rainbow Pride flag created by Gilbert to throw it under the NHS bus so to speak, and pretend it doesn’t still have value to a great number of LGBTQ+ people globally.

I am more than happy for a loan of the pride colours to show support for NHS staff and key workers but…personally, I feel that proper pay, PPE and the respect they all deserve at every level would be much more meaningful than clapping and borrowing our colours ­– which to my mind are merely token gestures to assuage guilty consciences.

‘The way I see it, if you want the rainbow,

you gotta put up with the rain.’

But we queer people have been rained on for centuries, with ignorance and persecution, we’ve earned our right to own our six-striped rainbows and its variants.